Why You Need A Christ-Centered Approach To Organizing Your Life

Helping Christian women and men like you live simpler, have more peace, spend more quality time with loved ones and with the Lord is my passion. I do that as a Certified Professional Organizer by helping you declutter and organize your homes and lives. When speaking to groups or when conducting bible studies, I’m always asked this question,  “Why did you write Organize His Way?” I decided to jot down a few ideas to explain from my heart how all this came to be.

When I began my business in 1998, only a few organized “how-to” books on the market that I would call a good quality read. Then, Julie Morgenstern wrote a book called “Organizing From the Inside Out,” that I felt was extremely comprehensive and something everyone could understand how to use. I found it quite humorous that when observing my clients’ home and seeing this book on many bookcases at my clients’ home, they explained that they couldn’t see how her methods would relate to their circumstances. This trend continued. As more and more books came on the market, I found that clients would buy multiple organizing books, and eventually, they would end up on all the clutter piles; how ironic was that!

There was a disconnect between self-help organizing books and teaching people how to get organized. But I couldn’t figure out how to translate that.

Then one day in 2004, I discovered a group called Faith–In-Organizing. Sandra Felton, the founder of Messies’ Anonymous created an online group for Christians looking to deal with the clutter in their lives. As a professional organizer, I was compelled to hear their first-hand accounts of their struggles and if any of them was finding a way out on their own.

As I began to listen in to their posts, I asked God to teach me how I might be able to help them. The thought then occurred to me to read the bible from the perspective of an organizer…that’s when the light bulb turned on!

It started with Manna

As I began reading in Exodus, my very first blog post came to life. I took the chapter about manna and saw how manna was a trust factor in the lives of the Israelites. They had to trust God to supply their needs daily. A lot of what clutter is…is fear-based. “What if I don’t’ have this…If someone needs this, then I should be able to supply it.” Instead of trusting God to supply our daily needs, we hang on to the manna, and like the manna in the desert, eventually, it rots. But it’s not only the physical object that rots but also the frustrations and arguments that come with all the stuff we are afraid to let go of.

Very shortly after I began reading the bible from an organizer’s perspective, five of my Christian colleagues in the organizing field decided to form a group called Faithful Organizers. This group would consist of professional organizers holding to a different God standard. I became their devotions and prayer director and began to write on biblical principles in organizing. That was in 2007. After the prodding of many of my colleagues, they asked me to write a devotional book. So as I began to write, the book took many twists and turns, and I began to see this not just as another organizing book but a bible teaching platform that goes where no other book went.

This project became bigger than just what I realized; this book became a work in process for many of my Christian clients. Because I put God at the center of every chapter, as my clients began understanding that clutter is the very opposite of what God has called us to. Each chapter was filled with God’s word, and I began to learn how to “Organize His Way”!

After my clients began sharing with others, I then began teaching it at my church. My fellow Faithful Organizers also began teaching it in their local churches across the US. The study is written not only for a single in-depth study but also, most importantly, it can be used for group study. “When God is in it, everything changes,” one of my students said.

The introduction to each chapter is filled with why God has called each of us to live an orderly life. The tag line is “Blessings~not Stuff.”

My readers have found the reality that God does indeed bless them as stuff is released. That can be physical stuff, activities, and mental stuff that keep us from hearing from Him.

As the years have progressed and I heard back from students, it was clear:

My greatest compliment came from a student who stated it like this. “My daily purposes are so much more enhanced because the distraction of relationships, time, and physical objects are not calling out for my attention as it was before.”

The Lord brought to mind that my daily purpose grows day by day and that at the end of all days, I will stand before my Lord Jesus, and He will ask what I was able to accomplish with the time and talents He gave me. I am so much more joy-filled knowing that I see this so much more clearer …that day is going to be a bright, bright, bright sunshiny day.

The teachings, scriptures, and revelations of how God moves to release the physical and mental clutter in your life will do miraculous things in your mind, your will, and your emotions. I know it will bless you and change your life for the better. Inner peace and calm are waiting for you on the other side of clutter.  They are yours for the taking. Grab your copy of Organize His Way: A Christ-Centered Approach to Organizing Your Life today.

Posted in Organize His Way 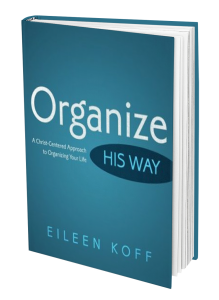 A Christ-Centered Approach to Organizing Your Life

GET YOUR COPY TODAY!